Elon Musk is on a roll and has been tweeting about his plans to incorporate cryptocurrencies with his companies. While most of these tweets were welcomed by the crypto community as they boosted cryptos prices such as Dogecoin, some had the opposite effects.

Recently, Elon Musk tweeted his concerns about the growing climate concerns contributed by cryptocurrency mining. He has effectively suspended the use of Bitcoin for vehicle purchases. This news came as a shock to many as Tesla announced its plan to accept the cryptocurrency in March.

However, this announcement met with an outcry from several investors and environmentalists about the possible harmful effects of this decision. In reply to the speculations, Elon Musk tweeted,

“Tesla has suspended vehicle purchases using Bitcoin. We are concerned about the rapidly increasing use of fossil fuels for Bitcoin mining and transactions, especially coal, which has the worst emissions of any fuel. Cryptocurrency is a good idea… but this cannot come at great cost to the environment.” He further added,

“Tesla will not be selling any Bitcoin and we intend to use it for transactions as soon as mining transitions to more sustainable energy. We are also looking at other cryptocurrencies that use <1% of Bitcoin’s energy/ transaction.” 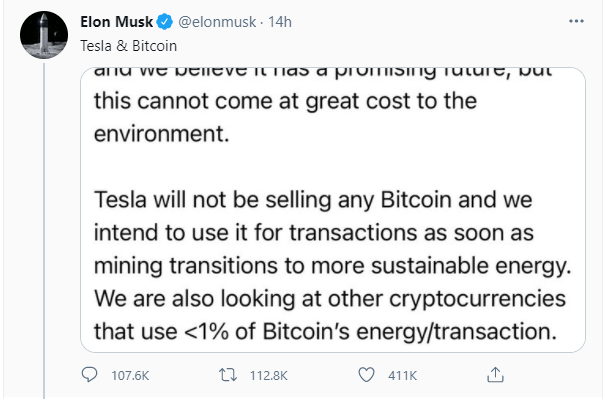 This tweet immediately led to a fall in Bitcoin price by more than 10% and Tesla shares. This decision had a mixed reaction among the social media community. While some people are happy about this decision, others are not. Also, a faction considers it as a marketing strategy to affect the crypto’s price.

However, on a deeper look, this might actually be a good thing for the crypto ecosystem. With big influencers such as Elon Musk addressing the environmental effects of cryptocurrencies, the crypto world will be forced to step up the game and develop a better alternative that is environmentally sustainable.

Cryptocurrencies are now being held accountable that will help them evolve and grow into a much more efficient industry. Several people in the crypto ecosystem have settled according to the existing standards, which limits its potential. Influencers such as Elon Musk addressing these concerns openly will bring a positive change in the crypto industry, and we all will be better because of it.